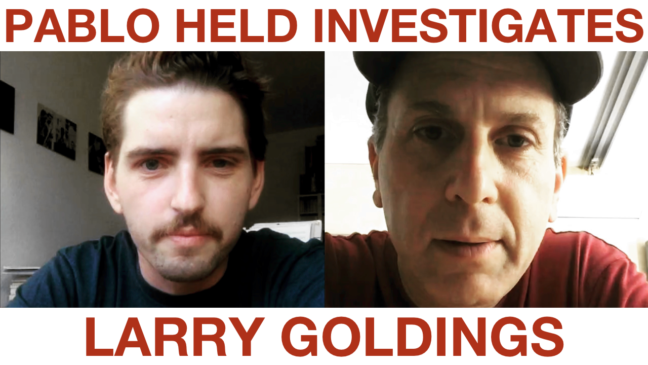 What is left to say about the incomparable Larry Goldings that hasn’t been said yet?

Frankly, after having shared a couple of these interviews + having written personal introductions to each one of these, I hope it doesn’t sound too repetitive… Why? Because all the stories of what happens when I’m inspired by someone share the same plot: I listen to someone for the first time, get inspired, I try to check out as much concerts/records/interviews/videos/etc as I can… I’ll transcribe songs, look for bootlegs, read the biography, I’ll try to check out the stuff that this person was influenced by… I’ll do everything that helps me understand this person’s process and I’ll do this with everyone that interests me.

This is why all the stories may sound a bit alike. I hope that’s OK.

So back to Larry.

When I was a kid I was listening to Larry’s playing on John Scofield‘s masterpiece record “Hand Jive”. Later when I was getting into playing the piano myself I used to play a long with it a lot. The line up, the repertoire and the amazing playing by Larry on organ and piano just put a spell on me. While my parents became fans of Larry’s music I followed them along, listening a lot to Larry’s own “Intimacy Of the Blues”, Scofield’s “Groove Elation”, Michael Brecker’s “Time Is Of The Essence” and other records. After a while I had most of Larry’s records, either through my parents or through my own purchases. My favorite Larry Goldings Trio record was always “Sweet Sience” and though I love everything that Larry has done, I have a special soft spot for this particular record. There was a time where I would only listen to my three favorite songs from that record : “Asimov”, “This Guy’s In Love With You” and “Spring Is Here” on repeat … to this day I still go back to that record a lot and I keep noticing news things in the music – it keeps on giving!

When I was 17 years old I had a lesson with great pianist and composer Florian Ross and he played me “Sticky Mack” from Larry’s piano trio record “Awareness”, a record that I didn’t know until that point. I was blown away! I’d say that “Awareness” is one of my top five favorite piano trio records of all time!

I got to talk to Larry a couple of times after concerts of him that I attended and he was always very kind and generous in sharing his memories when I asked him about stuff. This is our first lengthy conversation and I enjoyed it a lot. Thanks for talking to me, Larry!