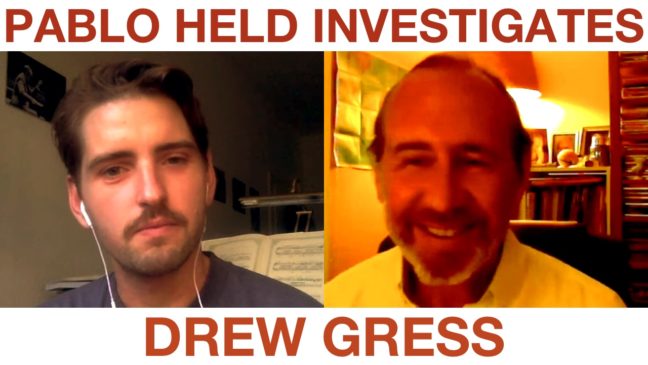 The first time I heard Drew Gress was on Fred Hersch’s beautiful trio album “Live at the Village Vanguard”. As I tell him right at the beginning of our conversation I was immediately drawn to his big sound. but also I was in awe of how lyrical he could be in one moment and how burning and risk-taking he would be in another moment. This was an important album for me and I regularly go back to it to this day.

Drew was also on a lot of other records that were very inspiring to me, for example all the other records with Fred Hersch, the Claudia Quintet albums, his own records, Ben Monder’s “Flux”, Antonio Farao’s “Thorn”, Tony Malaby’s “Adobe”, the Marc Copland albums, The Bill Carrothers albums, John Surman’s “Brewster’s Rooster”, “Within A Song” by John Abercrombie and many more…

I’ve learned a lot from listening to him on these records, from seeing him live on stage and also from this amazing workshop video that I encourage everybody to check out!

To me, Drew is one of the most eclectic musicians who always has something meaningful and deep to contribute to any musical situation, he’s a real hero of mine and it was a pleasure to talk to him. Hope you enjoy!