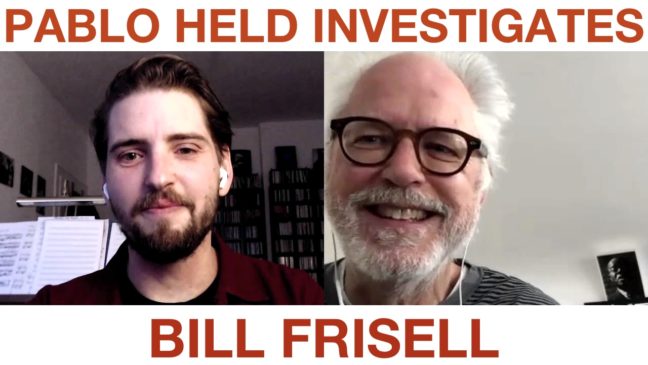 Bill Frisell was on the top my list right from the start of this interview series. Through the help of Mike Gibbs, I finally got in touch with Bill and we had a lovely conversation. What is there to say about Bill Frisell’s music that hasn’t been said yet? I mean, I don’t know anyone who knows about his music and doesn’t like it – everybody loves Bill Frisell! Maybe it’s because he’s so eclectic, so there’s something in there for everybody? Or because of his unique approach to the guitar? Or maybe because he enriches every musical setting? Because of his great tunes? His many different bands? The classic recordings he contributed to as a sideman? I really don’t know… there are so many things to love about him, his playing and his music. OK maybe I should stop rambling… You have a 2 hour conversation ahead of you, and you’re in for a ride. Enjoy!

For further listening, here are some of my favorite recordings with Bill:

• In Line, Bill Frisell with Dave Holland & Elvin Jones, Sign Of Life, Gone Just like a Train, Where in the World?, Hemisphere’s (with Jim Hall), Quartet, Bill Frisell/Ron Carter/Paul Motian/, Have a Little Faith, Small Town & Epistrophy (with Thomas Morgan), Songs we know (with Fred Hersch)